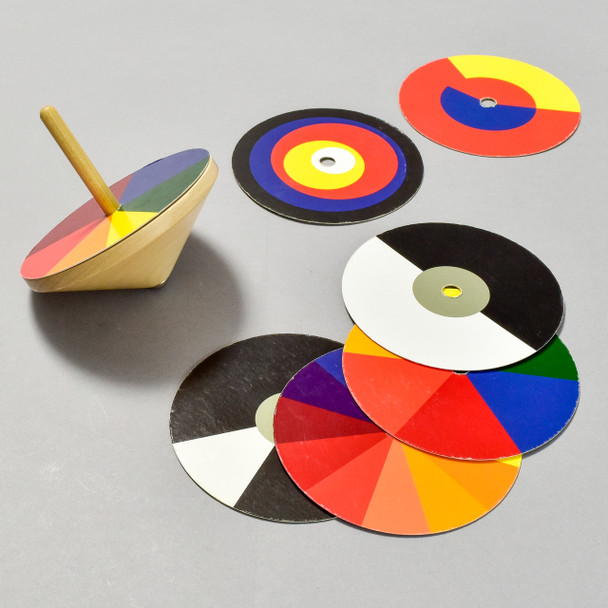 The Optical Color Mixer was designed by Ludwig Hirschfeld-Mack as a learning tool at the Bauhaus.  The mixer demonstrates how the rotation of the gyrating top produces the optical mixing of the colors printed upon the laid-on plates.  Aspects of color theory from Goethe, Schopenhauer and Holzel are demonstrated.  Each disc has information describing the phenomenon on the back of the disc.

Hirschfeld-Mack was born in Frankfurt and had his academic training in Stuttgart, and after finishing his studies, worked at the Bauhaus where his main activities laid in the theories of color and color projections.  The Bauhaus (1919 - 1933) has been important beyond the short time it existed, both on account of its educational methods of art which it developed and its influence on the styling of architecture, design and painting.

The color mixer has been reproduced in the joinery workshop of the Bauhaus since 1924.

MSRP:
Now: $12.00
Was:
In 1923, the Bauhaus held an exhibition of its achievements which ran from August to the end of September. This included lectures from both Walter Gropius and Paul Klee, exhibitions of paintings by...

MSRP:
Now: $20.00
Was:
Put pen to paper -- it might seem old-fashioned -- but shows you care!  These iconic images from the Bauhaus will bring a modern moment to your design-minded friends.  And use the sturdy...

MSRP:
Now: $20.00
Was:
In a fleeting 14-year period between two world wars, Germany’s  Bauhaus school of art and design changed the face of modernity. With  utopian ideas for the future, the school developed a...

MSRP:
Now: $49.00
Was:
This portfolio contains reproductions of well known Bauhaus members.  Works of Moholy-Nagy, Anni Albers and Herbert Beyer are part of the group of 8 prints.  Frame them or enjoy in the...

The ABC'S of Bauhaus: The Bauhaus and Design Theory

MSRP:
Now: $29.95
Was:
The Bauhaus, the legendary school in Dessau, Germany, transformed  architecture and design around the world. This book broke new ground when first published in 1991 by introducing...

MSRP:
Now: $6.99
Was: $14.00
Inspired by the love for Brancusi as well as African sculptures, these intricately designed and crafted wooden pencils are beautiful objects to be used for writing as well as to be admired...

MSRP:
Now: $12.00
Was:
While many of us can't go a day without a strong cup of coffee (or more!), Winslow Homer seldom traveled without paper, brushes and water based paints. Museum exclusive Ceramic 4 3/4" x 5...

MSRP:
Now: $4.99
Was: $20.00
Enjoy twelve months of one of the finest collections of arms and armor in the United States.  The exceptional permanent collection at the Philadelphia Museum  of Art looks at arms and armor...

MSRP:
Now: $20.00
Was:
Team Spirit -- just the right size for a hot chocolate when watching our favorite local teams! Pulled from a stamped book in the Museum’s library the Griffin was introduced in 1938,  marking the...

MSRP:
Now: $14.99
Was: $22.00
60 prompt cards designed to help you find perspective on life’s sorrows and regrets.  Every day brings with it temptations to lose our tempers: the behavior of partners, colleagues, children –...

The ABC'S of Bauhaus: The Bauhaus and Design Theory

MSRP:
Now: $29.95
Was:
The Bauhaus, the legendary school in Dessau, Germany, transformed  architecture and design around the world. This book broke new ground when first published in 1991 by introducing...