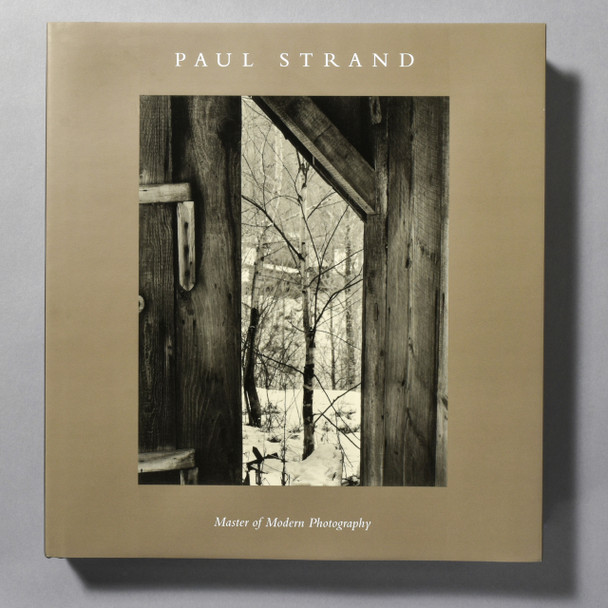 Through his amazing variety of innovative images, photographer Paul Strand (1890–1976) played a crucial role in establishing the medium's significance as a modern art form. Celebrating the Philadelphia Museum of Art's recent acquisition of the core collection of Strand's prints from the Paul Strand Archive, this stunning book comprehensively reassesses the artist's career in light of current scholarship and critical debates about his work. Featuring more than 250 plates, the catalogue includes many of Strand's iconic early photos such as Wall Street and Blind Woman alongside lesser-known master prints from all phases of his career.

Discussing the artist’s prolific career, from his emergence in Alfred Stieglitz's circle in New York in the early part of the century to his years spent working abroad in places such as Mexico, France, Italy, and Africa, Peter Barberie positions Strand as a remarkably independent modernist whose priorities shifted at several points and often ran counter to prevailing trends. Amanda N. Bock focuses on the years 1930–50, when Strand thoroughly explored the role of politics in modern art and relentlessly sought to identify the greater purposes of photography and filmmaking. The edited transcript from a roundtable discussion among key scholars touches upon many aspects of Strand's various projects from the 1930s to the 1960s. A detailed chronology brings to light new information about the life and work of an extraordinarily important and influential 20th-century photographer.

A History Of Photography: From 1839 To The Present

MSRP:
Now: $20.00
Was:
George Eastman’s career developed in a particularly American way. The founder of Kodak progressed from a delivery boy to one of the most important industrialists in American history, and a crucial...

MSRP:
Now: $45.00
Was:
This feminist retelling of the history of photography puts women in the picture—and, more importantly, behind the camera! In ten thematic, chronological sections, Tate Modern curator Emma Lewis...

MSRP:
Now: $32.50
Was: $65.00
John Ittmann (Editor), Cordula Grewe (Editorial Consultant) From the 1770s through the 1840s, German, Austrian, and Swiss artists used the medium of printmaking to create works that synthesized...

American Furniture: 1650-1840 Highlights from the Philadelphia Museum of Art

MSRP:
Now: $25.00
Was: $50.00
American Furniture, 1650–1840: Highlights from the Philadelphia Museum of Art is the first publication dedicated to one of the finest collections of its type in the country. Best known for...

A History Of Photography: From 1839 To The Present

MSRP:
Now: $20.00
Was:
George Eastman’s career developed in a particularly American way. The founder of Kodak progressed from a delivery boy to one of the most important industrialists in American history, and a crucial...

MSRP:
Now: $19.95
Was:
With an introduction by Timothy Rub, the George D. Widener Director and Chief Executive Officer The Philadelphia Museum of Art. This fully updated and beautifully redesigned handbook is the essential...

Sean Scully: The Shape of Ideas

MSRP:
Now: $45.00
Was:
By Timothy Rub and Amanda Sroka In a sustained exploration of the possibilities of abstraction, Sean  Scully (b. 1945) has created a rich body of work throughout his 50-year  career. Sean...

MSRP:
Now: $17.50
Was: $35.00
Throughout the 1970s and 1980s David Lebe (b. 1948) pushed the boundaries of photography, creating nuanced and visually complex images using innovative techniques. Often enhancing his prints with...

Represent: 200 Years Of African American Art In The Philadelphia Museum Of Art

MSRP:
Now: $42.00
Was:
Gwendolyn DuBois Shaw (Author) and Richard J. Powell (Author) This publication highlights nearly 150 objects in the collection of the Philadelphia Museum of Art that were created by American artists...

Arms and Armor: Highlights from the Philadelphia Museum of Art

MSRP:
Now: $22.50
Was: $45.00
Through the exceptional permanent collection at the Philadelphia Museum of Art, this book looks at arms and armor as art—from warfare to war games, from hunting to the pursuit of glory...

MSRP:
Now: $17.50
Was: $35.00
By Jennifer A. Thompson with contributions by Joseph J. Rishel and Eileen Owens Featuring ninety highlights from the Philadelphia Museum of Art’s stellar collection of Impressionist and...