Story of the Bayeux Tapestry 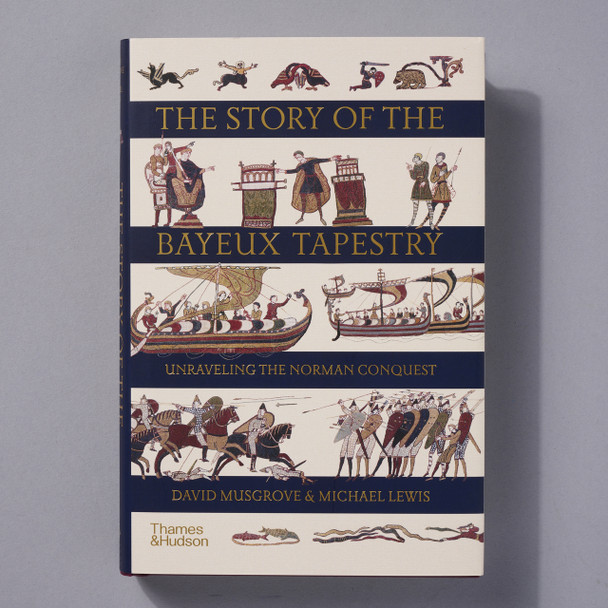 Story of the Bayeux Tapestry

The definitive and fully illustrated guide to the Bayeux  Tapestry. The full history of the events leading up to the Battle of  Hastings and the story of the tapestry itself.

Most people know that the Bayeux Tapestry depicts the moment when the last Anglo-Saxon king of England, Harold Godwinson, was defeated at the  Battle of Hastings in 1066 by his Norman adversary William the  Conqueror. However, there is much more to this historic treasure than merely illustrating the outcome of this famous battle. Full of intrigue and violence, the tapestry depicts everything from eleventh-century political and social life—including the political machinations on both sides of the English Channel in the years leading up to the Norman Conquest—to the clash of swords and stamp of hooves on the battle field.

Drawing on the latest historical and scientific research, authors David  Musgrove and Michael Lewis have written the definitive book on the  Bayeux Tapestry, taking readers through its narrative, detailing the life of the tapestry in the centuries that followed its creation, explaining how it got its name, and even offering a new possibility that neither Harold nor William were the true intended king of England.  Featuring stunning, full- color photographs throughout, The Story of the Bayeux Tapestry explores the complete tale behind this medieval treasure that continues to amaze nearly one thousand years after its creation.

The Story of Art: Pocket Edition

MSRP:
Now: $24.95
Was:
The Story of Art, one of the most famous and popular books on art ever written, has been a world bestseller for over half a century.  Attracted by the simplicity and clarity of his writing,...

MSRP:
Now: $21.99
Was:
A collection of stories from nations and cultures across our two continents—the Sea-Ringed  World, as the Aztecs called it—from the Andes all the way up to Alaska.  Fifteen thousand years...

MSRP:
Now: $65.00
Was:
A sweeping look at Chinese art across the millennia that upends traditional perspectives and offers new pathways for art history. Throughout Chinese history, dynastic time—the organization of...

On the Line: Conversations with Sean Scully

MSRP:
Now: $34.95
Was:
A unique look into the life and art of Sean Scully, an internationally celebrated artist and creative practitioner at the height of his powers. Sean Scully’s paintings of brushy stripes and blocks...

MSRP:
Now: $39.95
Was:
The Bauhaus, the school of art and design founded in Germany in 1919 and shut down by the Nazis in 1933, brought together artists, architects and designers—among them Anni and Josef Albers, Herbert...

MSRP:
Now: $49.95
Was:
Hidden in a portfolio among Auguste Rodin's inventory of more than 7,000 drawings donated to the state after his death in 1917 was a collection of figure drawings and watercolors labeled Secret...

MSRP:
Now: $19.95
Was:
The remarkable story of how Gilbert Baker and his friends created the iconic Rainbow Flag in 1978 Flags are brilliant and clever works of art and design, and they bring people together under a...