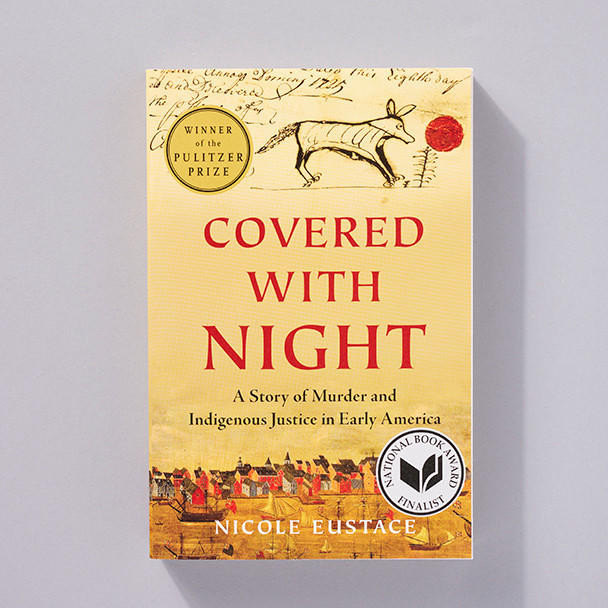 The Pulitzer Prize-winning history that transforms a single event in 1722 into an unparalleled portrait of early America.

In the winter of 1722, on the eve of a major conference between the Five Nations of the Haudenosaunee (also known as the Iroquois) and Anglo-American colonists, a pair of colonial fur traders brutally assaulted a Seneca hunter near Conestoga, Pennsylvania. Though virtually  forgotten today, the crime ignited a contest between Native American  forms of justice—rooted in community, forgiveness, and reparations—and the colonial ideology of harsh reprisal that called for the accused killers to be executed if found guilty. In Covered with Night,  historian Nicole Eustace reconstructs the attack and its aftermath, introducing a group of unforgettable individuals—from the slain man’s resilient widow to an Indigenous diplomat known as “Captain Civility” to  the scheming governor of Pennsylvania—as she narrates a remarkable  series of criminal investigations and cross-cultural negotiations.  Taking its title from a Haudenosaunee metaphor for mourning, Covered with Night  ultimately urges us to consider Indigenous approaches to grief and  condolence, rupture and repair, as we seek new avenues of justice in our  own era.

MSRP:
Now: $182.00
Was:
Jen Lorang is the designer behind Alchemilla. Working with a small team of talented jewelers in her backyard barn studio in Amherst, Massachusetts. Jen designs, fabricates and finishes each...

MSRP:
Now: $18.99
Was:
Discover a whole new world of dragons in this beautifully illustrated book on the scaliest of magical creatures. From every detail of their wings to the history of their treasure, you'll learn about...

MSRP:
Now: $29.95
Was:
A lively excursion into Japanese folklore and its ever-expanding influence on global popular culture through the concept of yokai. Monsters, ghosts, fantastic beings, and supernatural phenomena of...

We Came to America

MSRP:
Now: $17.99
Was:
A timely and beautiful look at America’s rich history of immigration  and diversity, from acclaimed artist Faith Ringgold, the Coretta Scott  King and Caldecot Honor winning creator of Tar...

MSRP:
Now: $27.50
Was:
An A-to-Z compilation of traditional gardening skills and heirloom plants, nostalgically illustrated with wood block art. Modern life is a cornucopia of technological wonders. But is something...

King Arthur & the Knights of the Round Table

MSRP:
Now: $29.99
Was:
King Arthur & the Knights of the Round Table examines the fact and the fiction behind Arthur, Lancelot, Merlin, Guinevere, and Galahad, among others, as well as the quest for the Holy Grail. ...

MSRP:
Now: $16.95
Was:
Ossman & Steel’s Guide to Health or Household Instructor  (its original title) is a collection of spells, remedies, and charms.  The book draws from the old Pennsylvania Dutch and...

MSRP:
Now: $24.99
Was:
A practical guide to plant-based remedies but also an inspiring and joyful ode to the world of plants. The Garden Apothecary shows us how to harvest and use commonly found plants, weeds and...

MSRP:
Now: $49.95
Was:
Ringgold's most formative and influential political works are gathered in this beautifully designed clothbound volume. Alongside reproductions of key works made between 1967 and 1981, Faith Ringgold:...

MSRP:
Now: $56.00
Was:
Handmade planter and drip dish with dreamy blue glaze by local artist and educator Hope Mead of Camden, NJ. Hope is the 3rd generation of potters in her family, with both her mother and grandmother...