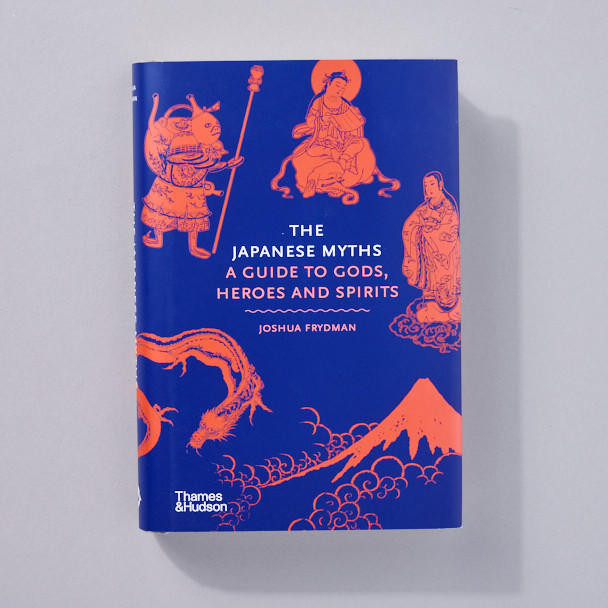 An illustrated guide to the fantastic world of Japanese myths: retelling the stories and exploring how Japanese mythology has changed over time, as new gods, heroes, and spirits have entered the  canon.

While people around the world love Japan’s cultural exports—from manga and anime to Zen—not everyone is familiar with Japan’s unique mythology that shapes these interests, which is enriched by Shinto, Buddhism, and regional folklore. The Japanese Myths is a smart and succinct guide to the rich tradition of Japanese mythology, from the earliest recorded legends of Izanagi and Izanami with their divine offspring and the creation of Japan, to medieval tales of vengeful ghosts, through to the modern-day reincarnation of ancient deities as the heroes of mecha anime.

Mythology remains a living, evolving part of Japanese society. The ways in which the people of Japan understand their myths are very different today even from a century  ago, let alone over a millennium into the past. This volume not only retells these ancient stories but also considers their place within the  patterns of Japanese religions, culture, and history, helping readers  understand the deep links between past and present in Japan, and the  ways these myths live and grow.

Author Joshua Frydman takes the very earliest written myths in the Kojiki and the Nihon Shoki  as his starting point, and from there traces Japan’s mythology through  to post-war State Shinto, the rise of the manga industry in the 1960s,  J-horror, and modern-day myths. Frydman ties in reinventions and retellings of myths that are present across all genres of contemporary Japanese culture, from its auteur cinema to renowned video games such as  Okami. This book is for anyone interested in Japan and Japanese exports, as knowing its myths allows readers to understand and  appreciate its culture in a new light.

MSRP:
Now: $27.00
Was: $54.00
By Lisa Minardi, with an interview by Ann Percy Among the most beloved forms of American folk art, fraktur is a Germanic tradition of decorated manuscripts and printed documents noted for its use of...

MSRP:
Now: $30.00
Was:
With special emphasis on Berks and Lehigh Counties, PA, this groundbreaking work is an unparalleled presentation of the area's most publically-acclaimed regional folk art, known as Hex Signs or Barn...

Birds of Edo: A Guide to Classical Japanese Birds

MSRP:
Now: $39.95
Was:
Admire exquisite birds from an eminent Edo-period nature field guide. As  a sequel to “Flowers of Edo”, we are pleased to present “Birds of Edo”.  Of all the illustrated encyclopedias of...

MSRP:
Now: $29.95
Was:
This abundantly illustrated book is an illuminating exploration of the impact of medieval imagery on three hundred years of visual culture.From the soaring castles of Sleeping Beauty to the...

MSRP:
Now: $16.00
Was:
Share the museum's collection of American Presidential China when writing to family and friends.  These notecards were created exclusively for us by Philadelphia illustrator Haley Harmon...

MSRP:
Now: $38.00 - $58.00
Was:
These White Striped Nesting Bowls are wheel thrown speckled gems made out of Rider Ceramics' South Philadelphia studio. Try the Small size for serving dips and sides! The Medium bowl is the ideal...

MSRP:
Now: $16.99
Was:
The Amish are known for their canning practices, which are essential to  communities of large families and even larger gardens. Written by Amish  writer Laura Anne Lapp, Amish Butters &...

Can You Keep A Straight Face?

MSRP:
Now: $14.95
Was:
A pop-up book with flaps to lift, tabs to pull and plenty of surprises Can you keep a straight face? Straight eyebrows? Straight lips? A  straight... nose? These pages are packed with...

MSRP:
Now: $75.00
Was:
Leaning on the role of nature in our everyday lives, we love Studio Roof's take on natural imagination. Access a bit of childhood curiosity, no matter your age! Add a pop of color to any room with...

MSRP:
Now: $285.00 - $398.00
Was:
This item requires a shipping surcharge. Some fragile or oversized items require additional surcharges that allow us to ensure your purchase arrives quickly and safely. Bring the whimsy and vibrant...