Africa's Struggle for Its Art 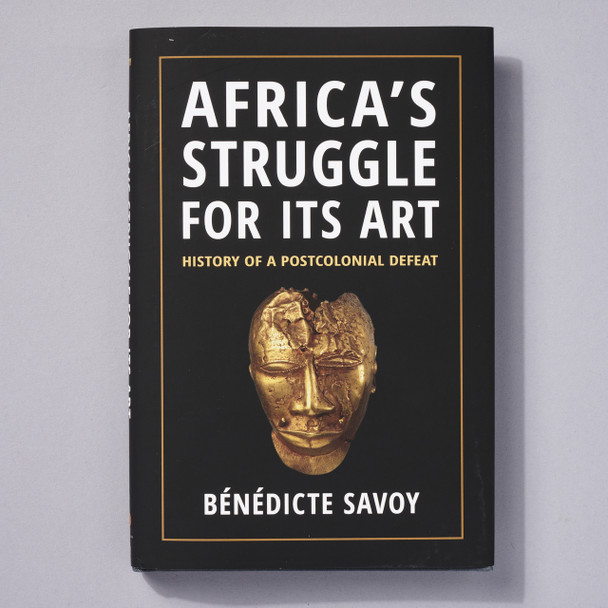 Africa's Struggle for Its Art

A major new history of how African nations, starting in the 1960s, sought to reclaim the art looted by Western colonial powers.

For decades, African nations have fought for the return of countless works of art stolen during the colonial era and placed in Western museums. In Africa’s Struggle for Its Art, Bénédicte Savoy brings to light this largely unknown but deeply important history. One of the world’s foremost experts on restitution and cultural heritage, Savoy investigates extensive, previously unpublished sources to reveal that the roots of the struggle extend much further back than prominent recent debates indicate, and that these efforts were covered up by myriad opponents.

Shortly after 1960, when eighteen former colonies in Africa gained independence, a movement to pursue repatriation was spearheaded by African intellectual and political classes. Savoy looks at pivotal events, including the watershed speech delivered at the UN General Assembly by Zaire’s president, Mobutu Sese Seko, which started the debate regarding restitution of colonial-era assets and resulted in the first UN resolution on the subject. She examines how German museums tried to withhold information about their inventory and how the British Parliament failed to pass a proposed amendment to the British Museum Act, which protected the country's collections. Savoy concludes in the mid-1980s, when African nations enacted the first laws focusing on the protection of their cultural heritage.

Making the case for why restitution is essential to any future relationship between African countries and the West, Africa’s Struggle for Its Art will shape conversations around these crucial issues for years to come.

MSRP:
Now: $16.95
Was:
Iconography, or the study of symbols—be they animals, artifacts, plants,  geometric shapes, or gestures—is an essential aspect of interpreting  art. One of the most consistent features of...

MSRP:
Now: $16.95
Was:
Pop Art refers to a post-war movement connecting art with  popular culture. Billboard signs, comic books, and movie stars were just  some of the subjects chosen by pop artists, such as Andy...

MSRP:
Now: $16.95
Was:
Street art is a phenomenon and subculture movement that reaches from the darkest urban backstreets to the most glamorous international art  fairs. Despite having earned a place in the canon of...

MSRP:
Now: $16.95
Was:
While it is considered by many artists to be a pure and simplistic form of expression, abstract art is also often thought of as vague or exceedingly theoretical. This new installment in the Art...

MSRP:
Now: $40.00
Was:
This bestselling branding bible has provided graphic designers with an indispensable reference source for over a decade. Logo is now getting a revamp with the addition of over 300 new logos in this...

New Beauty: A Modern Look at Beauty, Culture and Fashion

MSRP:
Now: $60.00
Was:
In recent years, the beauty industry has shifted the conversation towards the individual in a way it hasn’t done before. While people, and women in particular, have historically been enticed into...

Once Upon A Time Machine

MSRP:
Now: $25.00
Was:
Fairy tales have fueled our dreams and fired our imaginations for centuries. Step inside a time machine built by a collection of today's finest storytellers, and enter a range of futures where...

Maus I: A Survivor's Tale My Father Bleeds History

MSRP:
Now: $20.00
Was:
BlackStar creates the spaces and resources needed to uplift the work of Black, Brown and Indigenous artists working outside of the confines of genre. We do this by producing year-round programs...