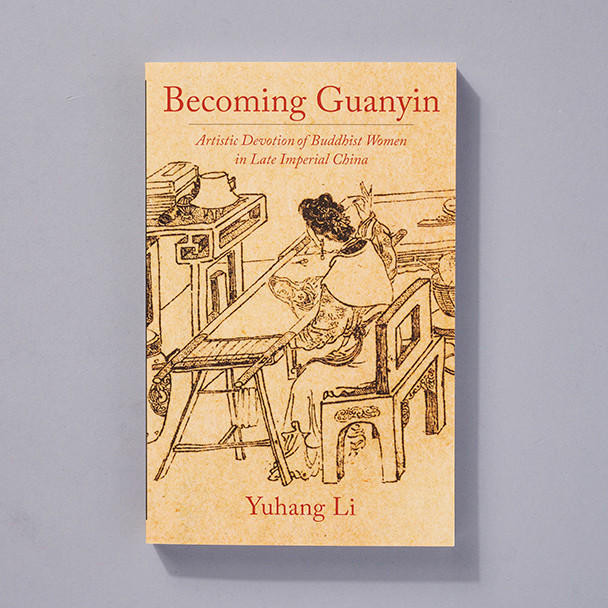 The goddess Guanyin began in India as the bodhisattva Avalokiteśvara, originally a male deity. He gradually became indigenized as a female deity in China over the span of nearly a millennium. By the Ming (1358–1644) and Qing (1644–1911) periods, Guanyin had become the most popular female deity in China. In Becoming Guanyin, Yuhang Li examines how lay Buddhist women in late imperial China forged a connection with the subject of their devotion, arguing that women used their own bodies to echo that of Guanyin.

Li focuses on the power of material things to enable women to access religious experience and transcendence. In particular, she examines how secular Buddhist women expressed mimetic devotion and pursued religious salvation through creative depictions of Guanyin in different media such as painting and embroidery and through bodily portrayals of the deity using jewelry and dance. These material displays expressed a worldview that differed from yet fit within the Confucian patriarchal system. Attending to the fabrication and use of “women’s things” by secular women, Li offers new insight into the relationships between worshipped and worshipper in Buddhist practice. Combining empirical research with theoretical insights from both art history and Buddhist studies, Becoming Guanyin is a field-changing analysis that reveals the interplay between material culture, religion, and their gendered transformations.

Becoming Philadelphia: How An Old American City Made Itself New Again

MSRP:
Now: $29.95
Was:
Once dismissed as a rusting industrial has-been—the “Next  Detroit”—Philadelphia has enjoyed an astonishing comeback in the 21st century. Over the past two decades, Inga Saffron has served as...

A History of Me

MSRP:
Now: $18.99
Was:
An uplifting message of hope for the future and pride in your history, inspired by a mother's experience of being the only Black child  in her classroom. Who do you see when you look in the...

MSRP:
Now: $18.99
Was:
Discover a whole new world of dragons in this beautifully illustrated book on the scaliest of magical creatures. From every detail of their wings to the history of their treasure, you'll learn about...

MSRP:
Now: $29.95
Was:
A lively excursion into Japanese folklore and its ever-expanding influence on global popular culture through the concept of yokai. Monsters, ghosts, fantastic beings, and supernatural phenomena of...

MSRP:
Now: $12.50
Was:
Leaning on the role of nature in our everyday lives, we love Studio Roof's take on natural imagination. Access a little bit of childhood curiosity with the 3D Deluxe Sapphire Dragonfly.   3D...

Rathod Krishna & Radha in the Forest Tile by The Painted Lily

MSRP:
Now: $18.99
Was:
Sashiko literally means little stabs and is a type of Japanese embroidery used to strengthen material or clothing. The elegant textile art of sashiko is celebrated in this picture book about the...

Rodin in the United States: Confronting the Modern

MSRP:
Now: $60.00
Was:
A compelling examination of French sculptor Auguste Rodin from the perspective of his enthusiastic American audience. This exhibition catalogue explores the American reception of French artist...