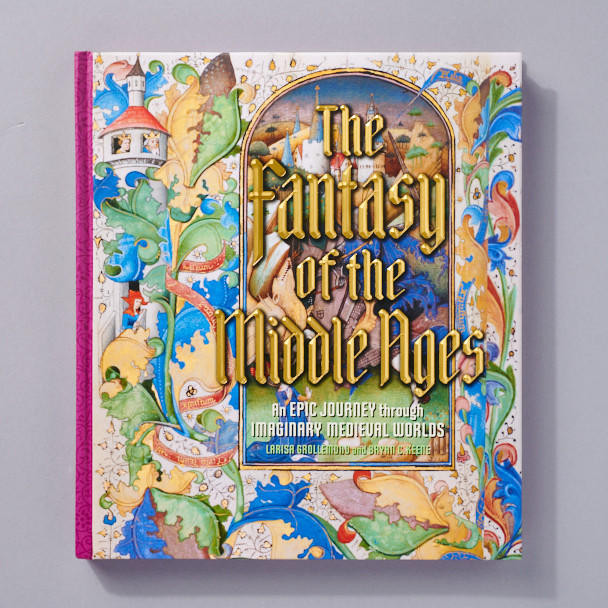 This abundantly illustrated book is an illuminating exploration of the impact of medieval imagery on three hundred years of visual culture.

From the soaring castles of Sleeping Beauty to the bloody battles of Game of Thrones, from Middle-earth in The Lord of the Rings to mythical beasts in Dungeons & Dragons, and from Medieval Times to  the Renaissance Faire, the Middle Ages have inspired artists, playwrights, filmmakers, gamers, and writers for centuries. Indeed, no other historical era has captured the imaginations of so many creators.

This volume aims to uncover the many reasons why the Middle Ages have proven so flexible—and applicable—to a variety of modern moments from the eighteenth through the twenty-first century. These “medieval” worlds are often the perfect ground for exploring contemporary cultural concerns  and anxieties, saying much more about the time and place in which they were created than they do about the actual conditions of the medieval period. With over 140 color illustrations, from sources ranging from  thirteenth-century illuminated manuscripts to contemporary films and  video games, and a preface by Game of Thrones costume designer Michele Clapton, The Fantasy of the Middle Ages will surprise and delight both enthusiasts and scholars.

Princely Armor In The Age Of Dürer: A Renaissance Masterpiece In The Philadelphia Museum Of Art

Rodin: The Age Of Bronze 9" Reproduction

MSRP:
Now: $75.00
Was:
Accessorize your space with your own Philadelphia Museum of Art masterpiece. This museum-approved reproduction of Auguste Rodin's The Age of Bronze will offer a worldly touch to any interior design. ...

MSRP:
Now: $24.95
Was:
An illustrated guide to the fantastic world of Japanese myths: retelling the stories and exploring how Japanese mythology has changed over time, as new gods, heroes, and spirits have entered the...

King Arthur & the Knights of the Round Table

MSRP:
Now: $29.99
Was:
King Arthur & the Knights of the Round Table examines the fact and the fiction behind Arthur, Lancelot, Merlin, Guinevere, and Galahad, among others, as well as the quest for the Holy Grail. ...

Can You Keep A Straight Face?

MSRP:
Now: $14.95
Was:
A pop-up book with flaps to lift, tabs to pull and plenty of surprises Can you keep a straight face? Straight eyebrows? Straight lips? A  straight... nose? These pages are packed with...

MSRP:
Now: $14.95
Was:
A pop-up book with flaps to lift, tabs to pull and plenty of surprises Do you prefer cats or dogs? Chocolate or vanilla ice-cream? The hen or  the egg? Mommy... or Daddy? These pages are packed...

Rodin in the United States: Confronting the Modern

MSRP:
Now: $60.00
Was:
A compelling examination of French sculptor Auguste Rodin from the perspective of his enthusiastic American audience. This exhibition catalogue explores the American reception of French artist...

MSRP:
Now: $16.99
Was:
The Amish are known for their canning practices, which are essential to  communities of large families and even larger gardens. Written by Amish  writer Laura Anne Lapp, Amish Butters &...

MSRP:
Now: $27.50
Was:
An A-to-Z compilation of traditional gardening skills and heirloom plants, nostalgically illustrated with wood block art. Modern life is a cornucopia of technological wonders. But is something...