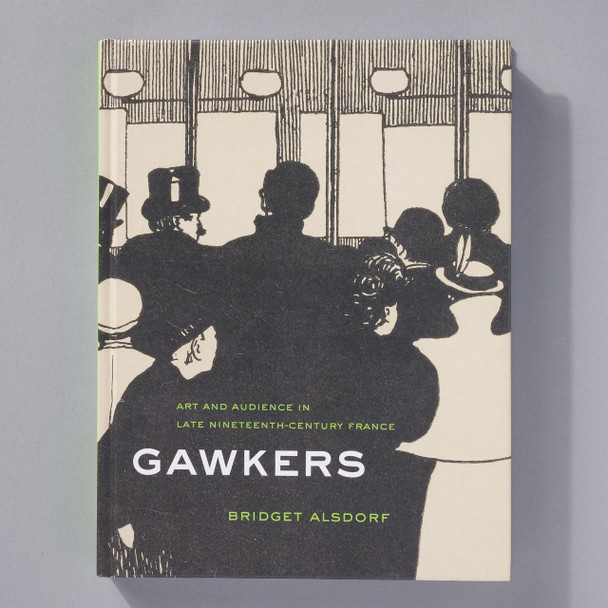 How the urban spectator became the archetypal modern viewer and a central subject in late nineteenth-century French art.

Gawkers explores how artists and writers in late nineteenth-century Paris represented the seductions, horrors, and banalities of street life through the eyes of curious viewers known as badauds. In contrast to the singular and aloof bourgeois flâneur, badauds were passive, collective, instinctive, and highly impressionable. Above all, they were visual, captivated by the sights of everyday life. Beautifully illustrated and drawing on a wealth of new research, Gawkers excavates badauds as a subject of deep significance in late nineteenth-century French culture, as a motif in works of art, and as a conflicted model of the modern viewer.

Bridget Alsdorf examines the work of painters, printmakers, and filmmakers who made badauds their artistic subject, including Félix Vallotton, Pierre Bonnard, Henri de Toulouse-Lautrec, Honoré Daumier, Edgar Degas, Jean-Léon Gérôme, Eugène Carrière, Charles Angrand, and Auguste and Louise Lumière. From morally and intellectually empty to sensitive, empathetic, and humane, the gawkers these artists portrayed cut across social categories. They invite the viewer’s identification, even as they appear to threaten social responsibility and the integrity of art.

Delving into the ubiquity of a figure that has largely eluded attention, idling on the margins of culture and current events, Gawkers traces the emergence of social and aesthetic problems that are still with us today.

Design of the 20th Century

MSRP:
Now: $25.00
Was:
Explore the modern age of design in this Bibliotheca Universalis edition  of the 20th century’s key movements and trends. Featuring countless  works from around the world, this is an...

MSRP:
Now: $24.95
Was:
Wit, wisdom, and willfulness abound on page after page of this vibrant anthology. A great pick for mid-century architecture, design, and lifestyle fans. Includes a brilliant range of well-known women...

MSRP:
Now: $40.00
Was:
For centuries artists and designers have recorded places, people, and life in travel sketchbooks. Over a period of fifty years, Laurie Olin, one of America’s most distinguished landscape architects,...

A Century of Color in Design

MSRP:
Now: $34.95
Was:
The allure of color is time honored and undeniable, but its inspired use in product design is a relatively new development. More than a century ago the Bauhaus movement changed the use of color in...

MSRP:
Now: $12.95
Was:
This delightful little book pays homage to the cat through artfully curated Japanese poetry and prints. No one captures the graces and idiosyncrasies of cats quite like the painters, printmakers,...

MSRP:
Now: $50.00
Was:
The first book to publish the entirety of Franz Kafka’s graphic output, including more than 100 newly discovered drawings. The year 2019 brought a sensational discovery: hundreds of drawings by the...

MSRP:
Now: $69.95
Was:
Afro-Atlantic Histories brings together a selection of more than 400 works and documents by more than 200 artists from the 16th to the 21st centuries that express and analyze the ebbs and flows...

MSRP:
Now: $49.95
Was:
Hidden in a portfolio among Auguste Rodin's inventory of more than 7,000 drawings donated to the state after his death in 1917 was a collection of figure drawings and watercolors labeled Secret...

MSRP:
Now: $19.99
Was:
This special and unusual atlas is a marriage of science and art like no other. Our universe is brimming with secrets, and surprising curiosities. Here  readers will learn the answers to all...