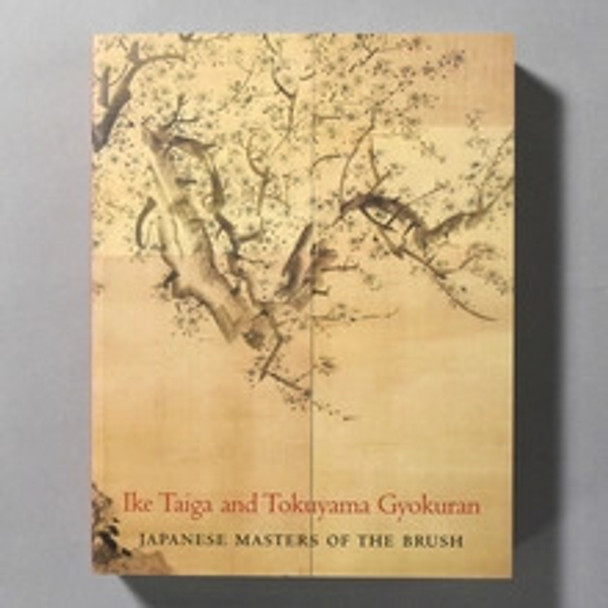 Taiga (1723–1776) and his wife, Tokuyama Gyokuran (1727–1784), were preeminent artists in eighteenth-century Japan. This landmark book—the only comprehensive survey available in English—focuses on the lives and times of these artists and accompanies the first-ever exhibition devoted to their work in the United States.

Considered by contemporaries to be an eccentric marvel, indifferent to worldly preoccupations, Taiga is best known as a pioneer of the so-called Nanga style, which emulated Chinese literati painting. He was hugely prolific and experimental, working in an impressive range of styles, techniques, compositions, and subjects to produce more than one thousand calligraphies and paintings, and many large-scale fusuma (sliding doors) and screens. While not as well known as her husband, Gyokuran was a significant artist and a well-regarded poet of Japanese verse. Taiga wrote poetry in Chinese as well as Japanese, and translated poems by both artists are featured prominently in this volume.

About the Author: Felice Fischer is The Luther W. Brady Curator of Japanese Art and Curator of East Asian Art at the Philadelphia Museum of Art.

MSRP:
Now: $14.00
Was:
Encourage fantasy play with this detailed, durable, and meticulously handpainted toy! In your child's imagination, this medieval world figurine fights epic battles, defends the kingdom against the...

MSRP:
Now: $14.00
Was:
This detailed and realistic horse in armor is the perfect accompaniment to the Weapon Master Dragon!  Arrayed in impressive regalia, this powerful steed is captured mid-gallop in a jousting tilt...

MSRP:
Now: $14.00
Was:
This powerful rearing horse is arrayed in impressive black and gold regalia.  A magnificent addition to a child's fantasy collection or to include in a medieval diorama. Ages 3 and up 5.91"...

MSRP:
Now: $16.00
Was: $32.00
The Philadelphia Museum of Art is fortunate to have a collection of Italian drawings that encompasses a broad sweep of Italy’s art history, from the Renaissance to Futurism to the contemporary,...

MSRP:
Now: $10.00
Was: $20.00
Michael Snow Photo-Centric focuses on a selection of the artist's photographic work from 1962 to the present. The book considers Snow's interest in late modernism's self-reflexivity and,...

MSRP:
Now: $99.99
Was: $150.00
Maija Louekari designed the vibrant Siirtolapuutarha (city garden) pattern in 2009. It tells the tale of a journey through a bustling city to a lush city garden overflowing with flowers and...

Richard Benson: The World Is Smarter Than You Are

MSRP:
Now: $22.50
Was: $45.00
A wide-ranging retrospective that reveals a master printer’s own photographs to be technically brilliant work of remarkable breadth and complexity.This book presents the first in-depth survey...

MSRP:
Now: $43.99
Was: $88.00
Inspired by Vincent van Gogh's The Road at Saintes-Maries, this lightweight scarf is the perfect accessory for any art enthusiast. Designed exclusively for the Philadelphia Museum of Art. Museum...

MSRP:
Now: $7.50
Was: $15.00
The Ars Medica Collection at the Philadelphia Museum of Art was established in 1949 with express aim to assemble a pictorial history of medicine.  A great number of these are devoted to...

Mad For Modernism: Earl Horter And His Collection

MSRP:
Now: $14.99
Was: $30.00
For the first time since 1931, the modern art collection of Philadelphia artist and collector Earl Horter has been reassembled. This great collection included some of the greatest works by the most...