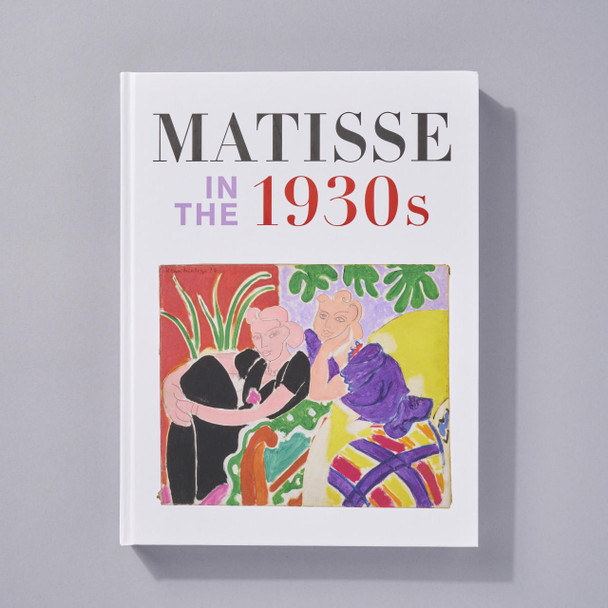 Exhibition Opening Oct 20
MSRP:
Now: $50.00
Was:
— You save
Frequently bought together:

The first in-depth examination of Matisse’s work in the 1930s, a key decade of creative innovation and renewal for this celebrated artist.

In 1930, as Henri Matisse (1869–1954) embarked on The Dance, a monumental mural commissioned by the American collector Albert C. Barnes, he began experimenting in ways that would permanently change the nature of his work. The use of pre-painted cut papers to lay out his compositions led to a new style of flat tones and bold shapes. He also increasingly used serial imagery to make visible his creative process, aiming to capture the flux of his own perceptions and emotions in the work of art.

This volume highlights and explains pivotal transformations in Matisse’s work in the 1930s across a range of media, including mural and easel painting, sculpture, printmaking, drawing, and the illustrated book. The transatlantic contributors also look at the relationship between Matisse and the Parisian art journal Cahiers d’art, which played an outsized role in publicizing Matisse’s work during this period, and consider his exhibitions, his ongoing involvement with decorative painting, his studio as a creative laboratory, and the role of his model and muse Lydia Delectorskaya in his studio practice.

Matthew Affron is the Muriel and Philip Berman Curator of Modern Art at the Philadelphia Museum of Art.

Cécile Debray is director of the Musée National Picasso—Paris.

Claudine Grammont is director of the Musée Matisse in Nice.

A Magical Day With Matisse

MSRP:
Now: $6.99
Was:
By Julie Merberg and Suzanne Bober With a narrative that will entertain art lovers of all ages, this new  board book is a fun way to introduce young children to fine art. The  little ones...

A Magical Day With Matisse

MSRP:
Now: $6.99
Was:
By Julie Merberg and Suzanne Bober With a narrative that will entertain art lovers of all ages, this new  board book is a fun way to introduce young children to fine art. The  little ones...

MSRP:
Now: $50.00
Was:
This exhibition publication is available with 3 different covers. 2 of the 3 are exclusive to the Philadelphia Museum of Art. Only the covers vary; the interior content for all 3 covers is the same...

MSRP:
Now: $24.00
Was:
Put pen to paper -- it might seem old-fashioned -- but shows you care!  With some of the iconic images from our museum collection, your note card will bring a bright spot to someone's day...

MSRP:
Now: $29.99
Was:
In Wild Sweetness, Thalia Ho captures the essence of the wild, and re-imagines it on the plate. She guides us through a tale of six distinct seasons and the flavors inspired by them: of bright,...

MSRP:
Now: $34.00
Was:
Your laptop does so much for you. Doesn’t it deserve a comfy cozy place to live? This puffy laptop sleeve from Baggu is quilted and stuffed to provide your 13" laptop or tablet with just enough...

MSRP:
Now: $25.00
Was:
Martine Syms’s Neural Swamp is an immersive installation that reflects the artist’s ongoing research into machine systems that erase or exploit Black bodies, voices, and narratives. This multichannel...

MSRP:
Now: $17.00
Was:
Well-known for his raw gestural style of painting with graffiti-like images and scrawled text, Basquiat's Crown will make an urban statement as you shop your local market.  When they're not in...

MSRP:
Now: $225.00
Was:
A family heirloom in the making, this stunning floral teapot by local maker Ruth Easterbrook is sure to be the talk of your tea party! Handmade and vibrantly decorated this cheerful round pot will...

MSRP:
Now: $198.00
Was:
Made from cotton, these dresses are super versatile. Wear as a dress, tunic, or kept open as a duster. Shades of gold, red and white on a black background make a bold statement. 100%...