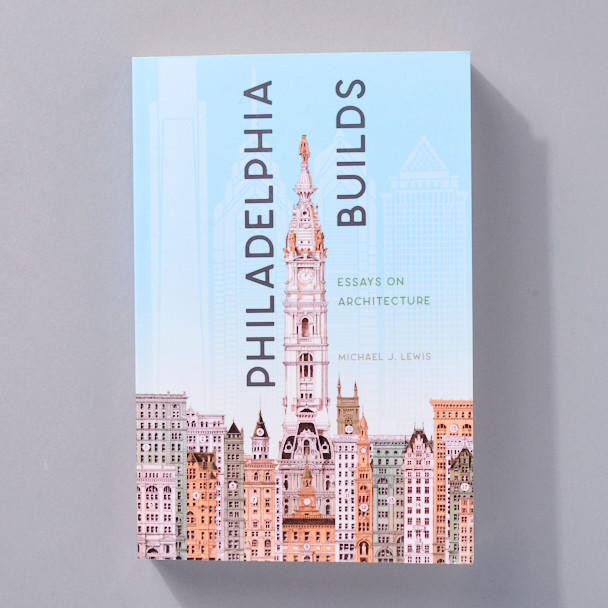 An in-depth tout of Philadelphia’s architectural history from the 1700s to the present day—for the general reader.

In Philadelphia Builds, architecture critic Michael J. Lewis explains why Philadelphia has produced so many extraordinary architects, including Louis Kahn, Frank Furness, and Robert Venturi. Lewis has written about the architecture of his native city for over three decades, and Philadelphia Builds brings together twenty-two of his best essays―including one about Kahn’s little-known project to design a memorial for Vladimir Lenin and another which is the first  substantial profile of Willis G. Hale, cult hero of Philadelphia  hipsters.

Other essays treat William Penn’s plan for his new Quaker city, the fierce competitions that gave the city its greatest civic monuments, and also contemporary buildings such as the Barnes Foundation. Richly illustrated with drawings and photographs throughout,  Philadelphia Builds is an engaging account of the people and  forces that shaped the city from the 1700s to the present day.

Philadelphia Architecture: A Guide To The City

MSRP:
Now: $28.00
Was:
Philadelphia Architecture, A Guide to the City (Fourth Edition)  provides hundreds of descriptions and photographs, both  color and black and white, of the city's architecturally most...

MSRP:
Now: $130.00
Was:
A gorgeous, large format volume that shows each hand-drawn illustration in stunning detail. The Architecture of Trees is the result of over twenty years of dedicated study by landscape architects...

MSRP:
Now: $60.00
Was:
Build one of the most iconic and elegant forms in American furniture history. Expert furniture crafter Kubalak teaches how to craft a reproduction of one of the most highly embellished and finest...

MSRP:
Now: $4.00
Was:
Prefect for a Philadelphia college student, a Philly souvenir, anyone who loves the city of Brotherly (and Sisterly!) Love!    Inspired by the Pennsylvania German culture and Philadelphia,...

Philadelphia: Portraits of the City

MSRP:
Now: $65.00
Was:
"Our Philadelphia, as is all our history, is made of these moments:  photographs and stories. And in our effort to find and delineate these  moments we also recognized that we approached a...

MSRP:
Now: $18.95
Was:
AMC's Best Day Hikes Near Philadelphia offers 50 of the region's best hikes for all levels. Ideal for families, tourists, and locals alike, this easy-to-use guide will help hikers explore Eastern...

MSRP:
Now: $21.95
Was:
The best way to experience Philadelphia is by hiking it. Get outdoors with local author and hiking expert Lori Litchman with the new full-color edition of 60 Hikes Within 60 Miles: Philadelphia...

American Furniture: 1650-1840: Highlights from the Philadelphia Museum of Art

MSRP:
Now: $25.00
Was: $50.00
American Furniture, 1650–1840: Highlights from the Philadelphia Museum of Art is the first publication dedicated to one of the finest collections of its type in the country. Best known for furniture...

MSRP:
Now: $4.50
Was: $8.99
By Alexandra  Alevizatos  Kirtley In 1772, a group of Philadelphia artisans published Prices of Cabinet and Chair Work, a 36-page booklet listing furniture forms, retail prices, and...

MSRP:
Now: $35.00
Was:
Alexandra Alevizatos Kirtley (Author), Peggy A. Olley (Author) with an essay by Jeffrey A. Cohen This handsome book explores in depth a group of stunning painted and gilded furniture designed by the...

MSRP:
Now: $60.00
Was:
Build one of the most iconic and elegant forms in American furniture history. Expert furniture crafter Kubalak teaches how to craft a reproduction of one of the most highly embellished and finest...