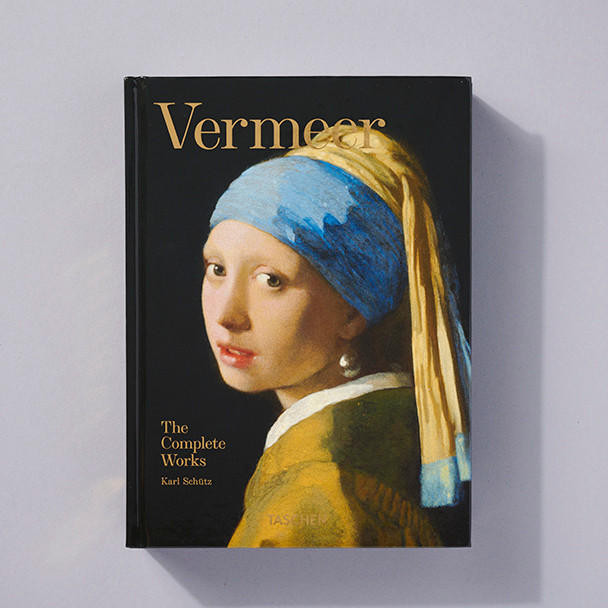 Discover one of the most admired artists in history: Johannes Vermeer. Complete with crisp reproductions, details, and insightful essays, this monograph spans his entire repertoire, illuminating the artist’s outstanding ability not only to bear witness to the spirit of the Dutch Golden Age, but also to encapsulate an entire story in just one artist.

Despite numbering just 35, his works have prompted a New York Times best seller; a film starring Scarlett Johansson and Colin Firth; record visitor numbers at art institutions from Amsterdam to Washington, DC; and special crowd-control measures at the Mauritshuis, The Hague, where thousands flock to catch a glimpse of the enigmatic and enchanting Girl with a Pearl Earring, also known as the “Dutch Mona Lisa”.

In his lifetime, however, the fame of Johannes Vermeer (1632–1675) barely extended beyond his native Delft and a small circle of patrons. After his death, his name was largely forgotten, except by a few Dutch art collectors and dealers. Outside of Holland, his works were even misattributed to other artists. It was not until the mid-19th century that Vermeer came to the attention of the international art world, which suddenly looked upon his narrative minutiae, meticulous textural detail, and majestic planes of light, spotted a genius, and never looked back.

MSRP:
Now: $19.95
Was:
Drawing Trees provides guided illustration techniques for beginning artists looking for a relaxing new hobby. Tracing the lines of each tree, leaf, and seed is an exercise in mindfulness: notice...

MSRP:
Now: $18.95
Was:
Award-winning journalist Natalie Pompilio guides you through 30 unique walking tours in this comprehensive guidebook. Go beyond the obvious with self-guided tours that showcase famed fare as...

MSRP:
Now: $50.00
Was:
This exhibition publication is available with 3 different covers. 2 of the 3 are exclusive to the Philadelphia Museum of Art. Only the covers vary; the interior content for all 3 covers is the same...

MSRP:
Now: $39.00
Was:
This item requires a $10 Shipping Surcharge. Some fragile or oversized items require additional surcharges that allow us to ensure your purchase arrives quickly and safely. To preserve the integrity...

Alain Locke and the Visual Arts