We asked Dirk Breiding, Associate Curator of Arms and Armor at The Philadelphia Museum of Art, to answer questions about the museum's world class collection.

His newly released book "Arms & Armor: Highlights from the Philadelphia Museum of Art"  is available for purchase here.

What are the most visited/asked about pieces?

In general, the Museum’s collection is numerically very strong in the area of armor while the majority of our excellent firearms holdings is currently not on display (following an extensive research and conservation project); so, questions from visitors and members of our general audiences tend to focus mostly on armor. 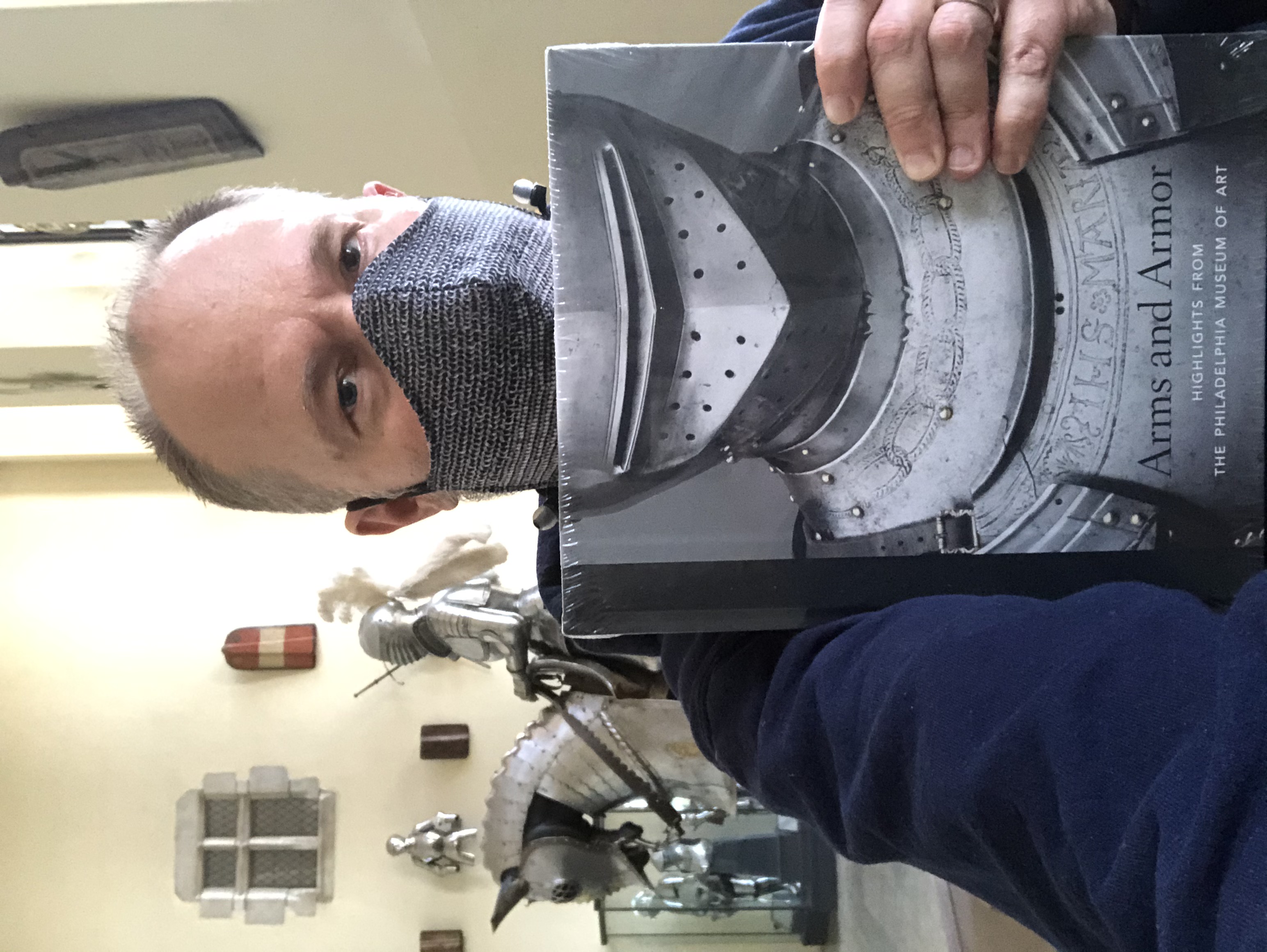 How do you decide which pieces go out into the galleries?

The decision which objects will go on permanent display, or be featured in a book about collection highlights, is based on several factors by which most art and historical objects are assessed. These are authenticity - is the object real, or mostly real (has it been extensively restored and/or added to)? Quality - how good are materials, craftsmanship, artistry and decoration? Rarity - are there or were there once dozens or even hundreds or thousands of similar examples; is it one of only a few surviving specimen, or is the object perhaps, as far as one can tell, even unique? Condition - how well has the object “weathered” the storms of time; is it in pristine condition or just a fragment, badly damaged, and/or excavated from the ground or water? Provenance - who were the artist[s] making the object, who originally owned it, can it be associated with any historic events, and where has it been since it was made?

Often, these aspects do not carry equal weight: for instance, an otherwise relatively common object may still be put on display if quality and condition are outstanding, or it belonged to a famous person; on the other hand, a rare object might be featured despite originally being of average quality and surviving only in fragmentary condition.

To quote from the Introduction: “The arms and armor in this book represent not only a selection of some of the best objects in the museum’s collection but, in several cases, they rank among the best examples of their kind anywhere. Individually and collectively, they denote the high regard in which their makers and original owners, as well as later collectors, held them.” 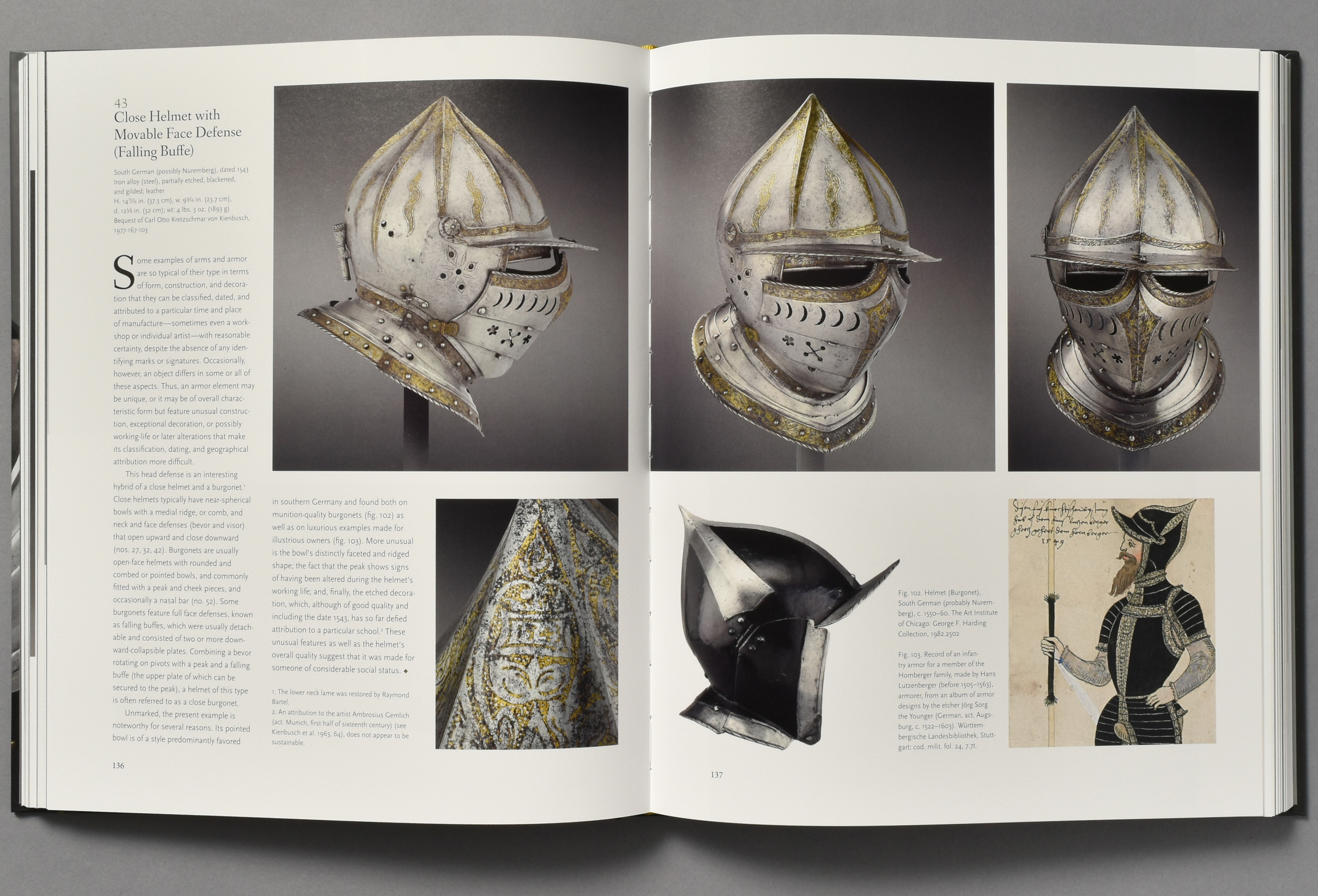 Have you found that pop cultural trends like Game of Thrones have affected the visitor experience? Is there something which has suddenly come to the fore as a matter of interest?

Yes, absolutely. Three particular helmet examples (the German sallet, the Italian sallet, and a close helmet of “Savoyard” or “death’s head” type) receive increased attention every year in May, due to their resemblance to the outfit of certain characters from the Star Wars franchise and social media users having fun with corresponding hashtags (#MayTheForth and #RevengeOfTheFifth). The enormous success of the Game of Thrones series, likewise, appeared to increase the interest in the everything arms and armor – the Museum hosted a cosplay event, and in 2015 The Mountain himself even paid us a visit during which he held one of our large two-handed swords! 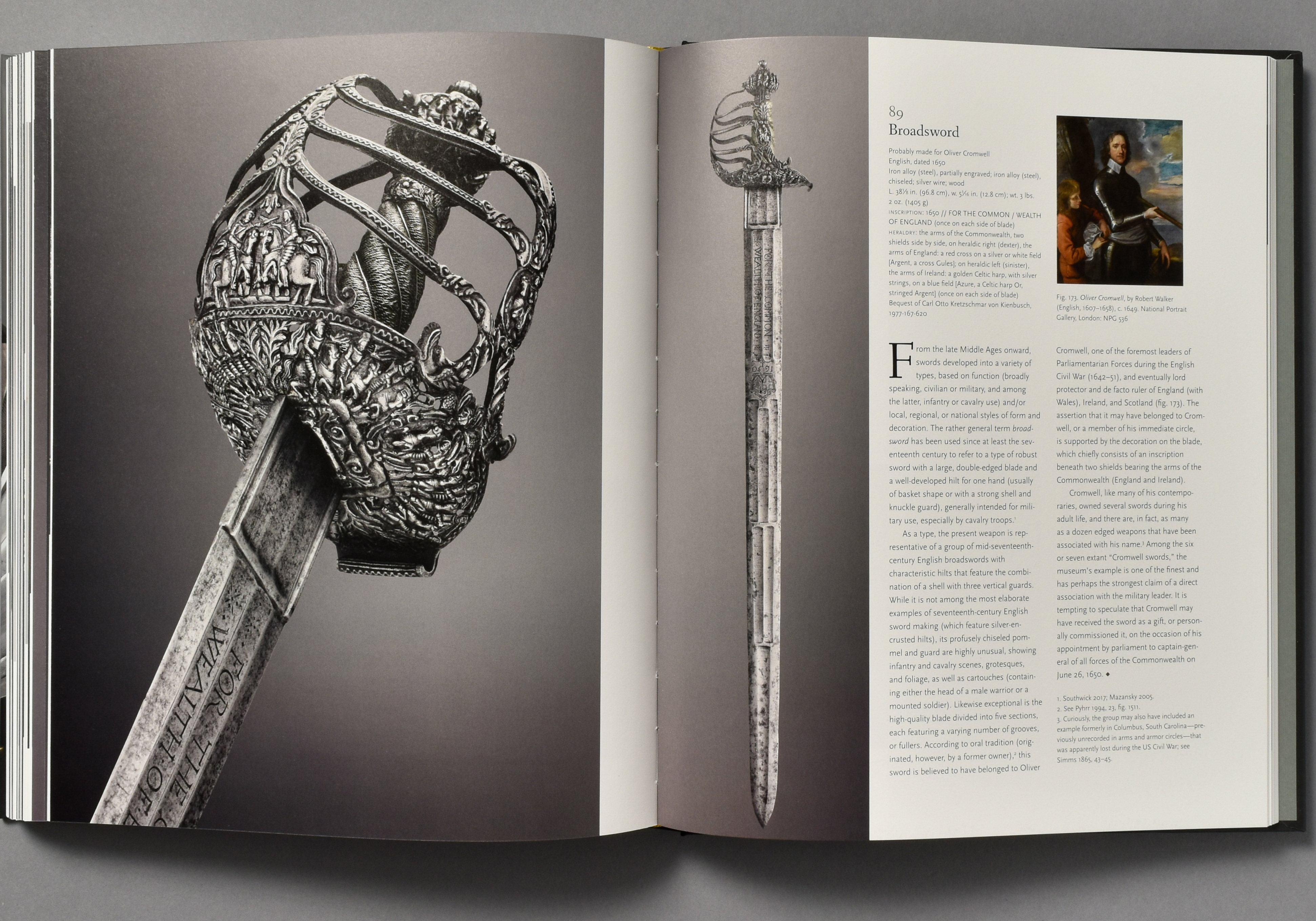 What is the oldest piece in the collection?

The oldest object in the Museum’s arms & armor collection is probably an edged weapon from the Bronze Age. But in terms of armor, it also includes a number of bronze helmets from Classical Antiquity (Ancient Greece and Rome). None of these objects are currently on display, however, due to complex conservation issues.


Is the collection mostly for ceremonial use? How many items were actually used in combat?

Without having made a study of it, it is probably fair to say that well over half of the collection consists of objects made to be used, or that would have been usable (even though they may be highly embellished), for their intended purpose. It is worth emphasizing, however, that the functional distinction is not simply between combat and ceremonial, but that many objects could be used for more than one function, which included war as well as ceremonies, but also hunting and “sport”, i.e. tournaments and shooting competitions with crossbows or firearms.

Whether any object in the Museum’s collection was actually used in battle, for hunting, or in tournaments, is difficult to say and must be assessed on an individual basis (since any damage may also be the result of later conflicts, unprofessional handling, or mischief). For example, the recently acquired fourteenth-century helmet (bascinet) features damage that appears to have been inflicted by a staff weapon, while the fragmentary armor for the joust of peace bears clear marks evidently caused by having been struck repeatedly with a lance; at the same time, a hole in the Radziwill cuirass, seemingly caused by a weapon, is in fact the result of corrosion. . 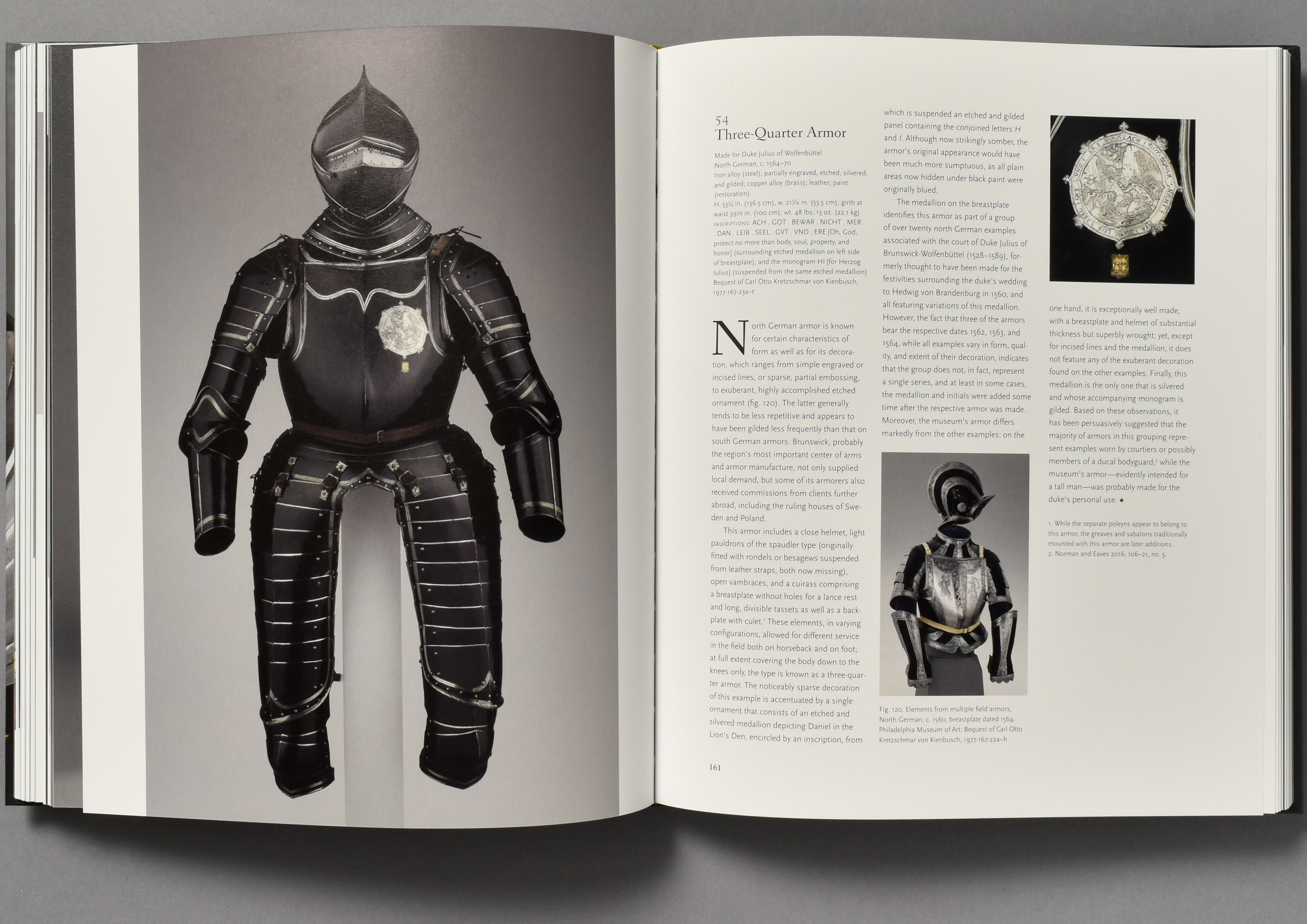 Tell us about what it was like to wear a suit of armor. Was it difficult to see out of the helmets? Is there any one style of helmet which is safer in combat?

The answers to these questions depend on numerous factors: the kind of armor (armor for field use or for the tournament? Armor for heavy cavalry use or for light cavalry or infantry use? Complete armor, three-quarter armor, or half armor?). Armor for use in various tournaments would only be worn for the event itself, usually a few hours at most. Field armor would be worn as long as was deemed necessary: several hours, for the whole day, or –as is attested in a few written sources– even for several days with men-at-arms and knights even sleeping in armor if the situation demanded it.

As for the helmet questions: armor must always strike a compromise between protection and practicality: more protection means higher weight (= less mobility, risk of fatigue and overheating), less visibility, and restricted oxygen supply; a lighter helmet, on the other hand, may offer good visibility, air supply, and mobility but would not afford the same protection as a heavier example. Accordingly, different helmets were worn for different purposes, some were better suited for specific uses only while others were more versatile; some helmets offered excellent protection but restricted visibility, others offered excellent visibility but not as much protection.


If you were going into battle what piece from our collection would you take with you?

If I had to participate in a late medieval or Renaissance battle, I would probably choose the armors for man and horse – not only are they of high quality, offering superior protection for both the horse and rider, but they are also visually quite stunning. And looking good in armor not only projected power but it also signaled that taking the owner captive and holding him for ransom may be more lucrative than to kill him. 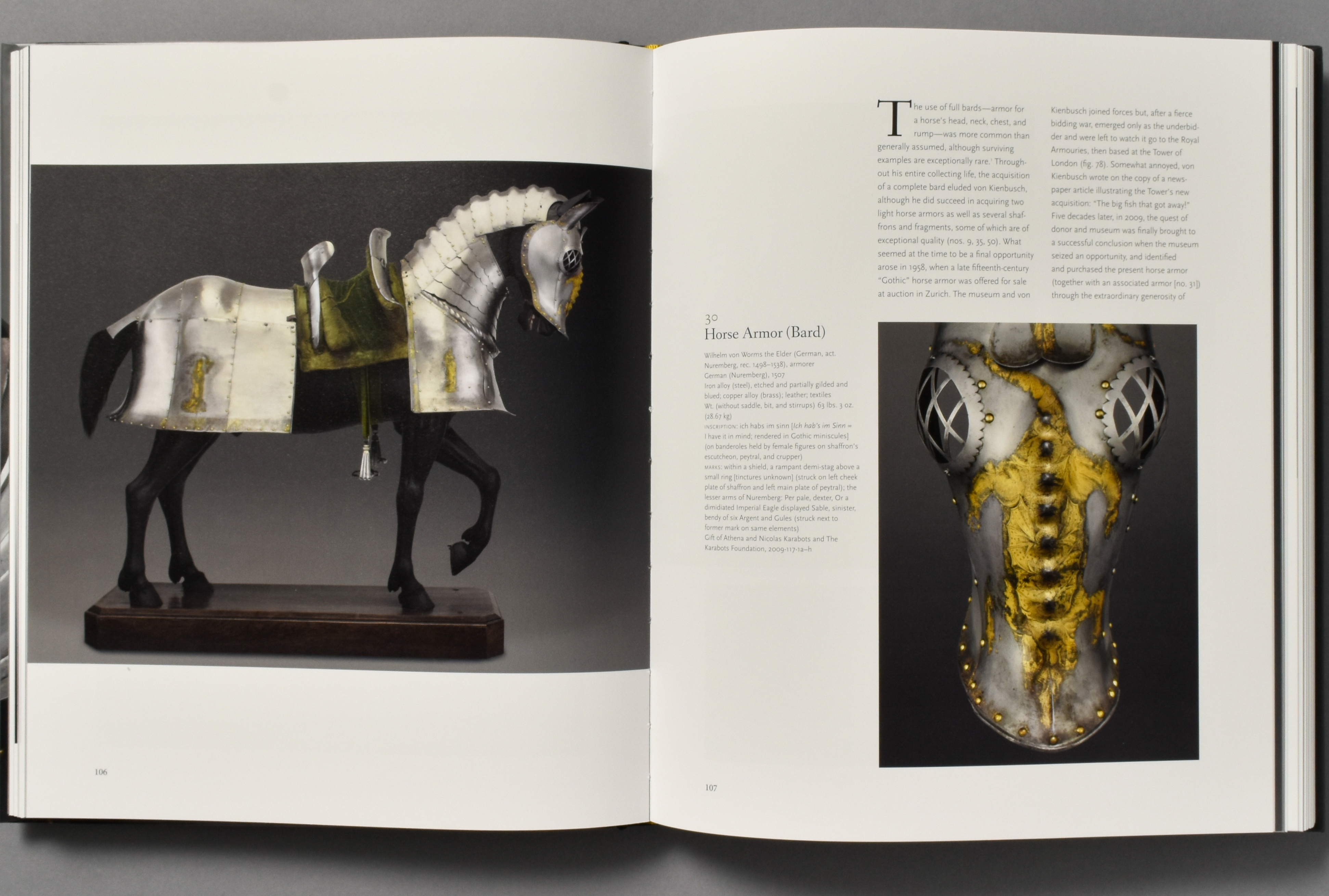 What is your favorite piece featured in the book?

To choose a favorite object from among a selection of the 100 or so best and most interesting examples of arms and armor in the Museum’s collection (which ranks among the top collections in the world and in the United States is second only to that at the Metropolitan Museum) is no easy task. In fact, I have a number of favorite objects. However, if it can be only one, then the object that has probably fascinated me the most in recent months and years are the cuirass and shoulder defenses made in Cologne for the shipman Kunz van Unkel – of outstanding quality, in excellent state of preservation, beautifully decorated (including personalized embellishment) and made for a member of the working upper middle class (rather than a knight or nobleman), there is much still to be learned, for example, the identity/ies of the armorer and the etcher.

Which is better, the longbow or the crossbow?

Ah, one of the most popular arms and armor questions, even though its premise is somewhat problematic – better how (range, accuracy)? And better for what (warfare, hunting, target shooting)? In the hands of experienced archers, both weapons were effective, quite accurate, and had comparatively similar ranges. However, the Welsh and English longbow had one major disadvantage: proficiency required years of dedicated training, considerable upper body strength, as well as space large enough to accommodate the size of the bow and some noticeable movement before each shot. On the other hand, proficiency with the crossbow only required a bit of practice but – due to the invention of mechanical spanning aids – no particular strength. Moreover, once spanned and readied to shoot, a crossbow allowed its operator to sit quietly and wait for their “prey” while all the time they needed to take aim. It is thus an ideal weapon for siege warfare, the hunt, and for target shooting; and at least in that regard it is probably “better” than the longbow.

For a limited time, members receive a free enamel helmet pin with the purchase of Arms & Armor. The pin is inspired by the Peffenhauser Burgonet (Helmet) and designed in collaboration with Dirk Breiding.

No code needed for this special offer. 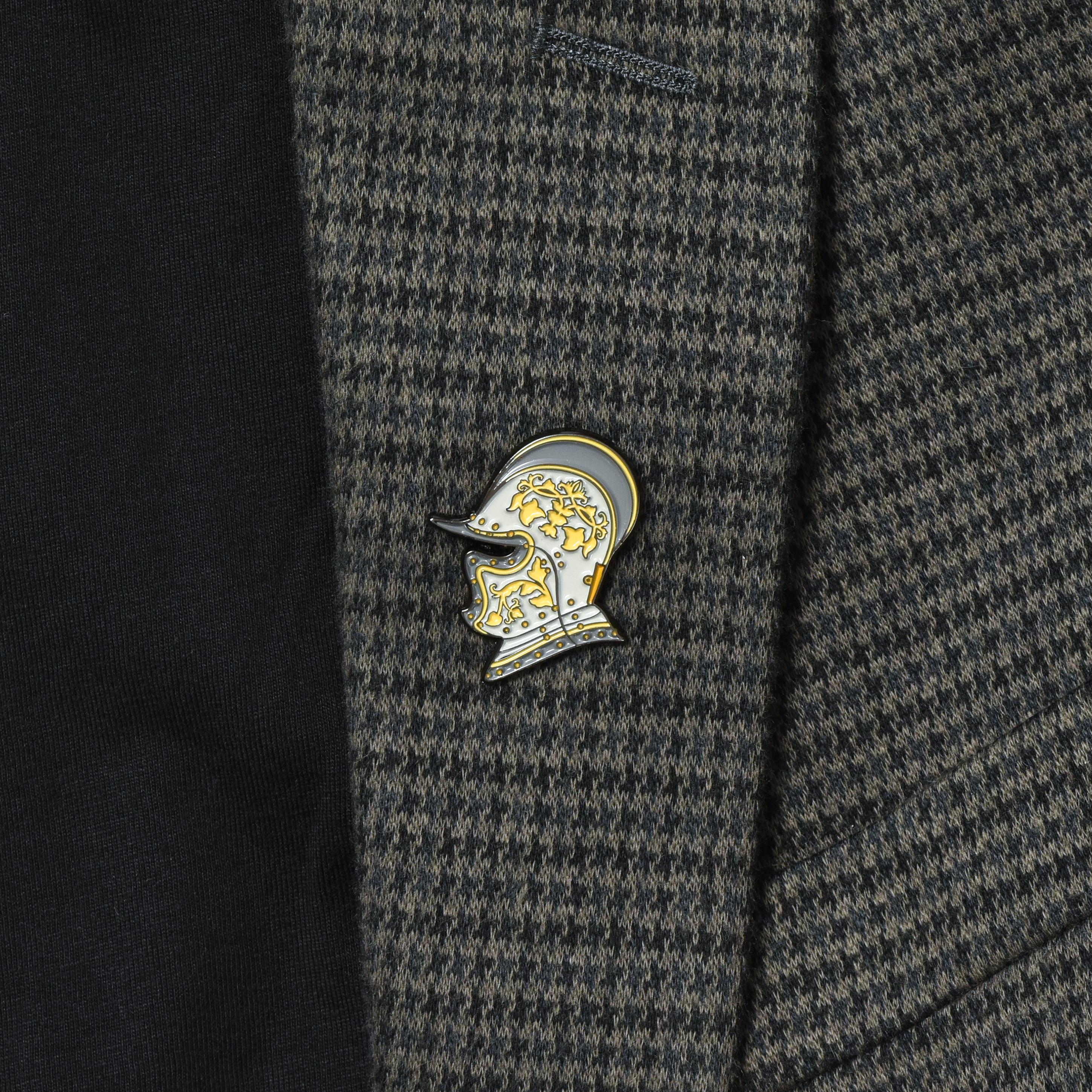 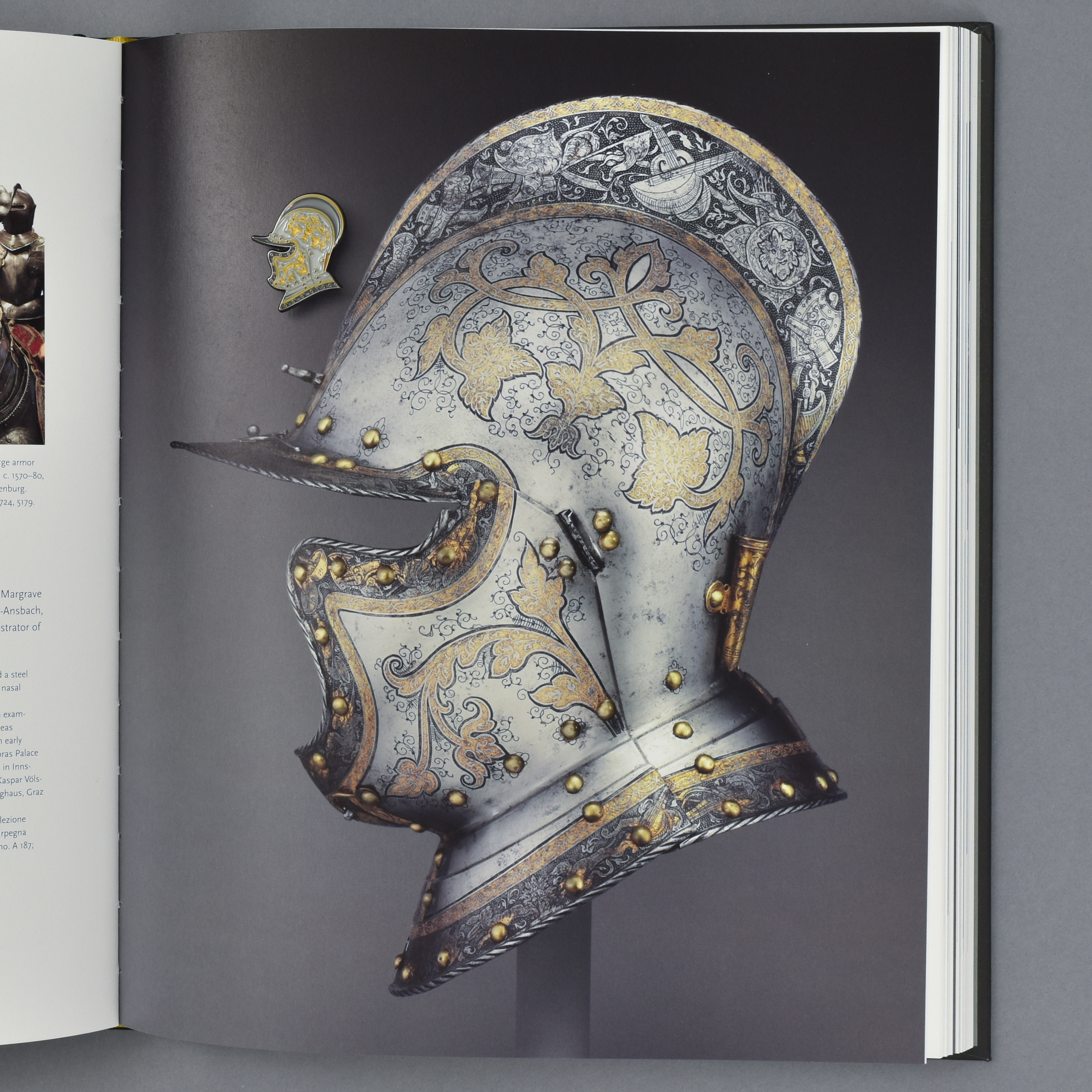 Dirk Breiding is the J.J. Medveckis Associate Curator of Arms and Armor in the Department of European Decorative Art and Sculpture at the Philadelphia Museum of Art. Born and raised in Germany, he began his academic education in Frankfurt and Edinburgh but completed his studies in London, holding a BA as well as a Master’s Degree in Art History and History from University College London. After internships and temporary research positions with the Royal Armouries in London, the Royal Armoury in Stockholm, and the Metropolitan Museum of Art in New York, Breiding worked in the Medieval Department of the British Museum and the auction house Christie’s before moving to New York to join the Metropolitan Museum of Art in 2001. There he successively held the positions of fellow, curatorial assistant, and assistant curator, co-curated the exhibition The Armored Horse in Europe 1480-1620 (2005), published on subjects such as tomb effigies, codpieces, misconceptions about arms and armor, and crossbows, and contributed to several exhibition catalogues in the US and in Europe. In 2013, the Metropolitan Museum published “A Deadly Art”, a catalogue of the Met’s collection of European crossbows and related accessories. The same year, Breiding joined the Philadelphia Museum of Art where he is currently working on the development of online exhibitions, the preparation of several articles for publication (on topics such as 14th-century armor, crossbows and firearms, and tomb effigies) as well as the planning of a partial re-installation of the Museum’s collection of arms and armor, particularly crossbows and firearms

His latest book, “Arms & Armor – Highlights from the Philadelphia Museum of Art” can be purchased here.